Simba sc is the only team from the east and central African region of Mainland Tanzania participating in the CAF tournament so far where it is in the group stage of the Confederations Cup in Africa. The Lions are in Group D which includes four teams which are:
Simba Sc
RS Berkane
Asecc Mimosa
US Gendarmerie

Simba Sc is the defending champion in the Tanzania Premier League after winning the 2020-2021 season so it started in the club champions cup Africa unfortunately did not make it to the group stages and was relegated to the CAF Confederation CUP.

Simba Sc are set to play their final match of the group stage on Sunday, April 3, 2022 at the Benjamin William Mkapa Stadium by hosting a team from Niger US Gendermerie.

In this match Simba SC need only a 3-point victory to secure a place in the next round of the CAF Confederation CUP 2021-2022 quarter-finals. So Simba Sports Club has started making preparations by encouraging their fans to show up in large numbers to support their team.

It should be noted that the Lions have made a name for themselves by bringing many fans into the field among other African teams.

Simba Sc has set low targets to attract more fans to enter the field in large numbers to support their team. To watch the match the fans will have to get a ticket at the rates set below: 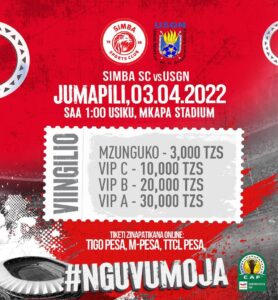 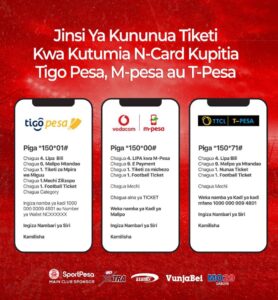 Tags: Simba vs US Gendarmerie