JOB VACANCIES AT THE UNIVERSITY OF DODOMA-UDOM 2021

APPLY FOR JOB VACANCIES AT THE UNIVERSITY OF DODOMA-UDOM

The University of Dodoma (UDOM) is a public university in central Tanzania located in Dodoma, the country’s capital. Construction is underway on a 6,000-hectare site in the Shimwaga District about 8 kilometers (5.0 mi) east of downtown Dodoma.

The University of Dodoma was officially established in March 2007 after the signing of the charter by the President of the United Republic of Tanzania, Jakaya Kikwete. The first academic programs began in September 2007.  UDOM is currently the fastest growing university within the country, larger than any other university within the country, and is praised for producing competent and qualified candidates who are competitive in the job markets.

JOB VACANCIES AT THE UNIVERSITY OF DODOMA-UDOM

Bellow is the announcement given by the University of Dodoma that you can read it and apply now. 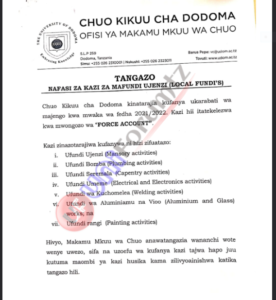 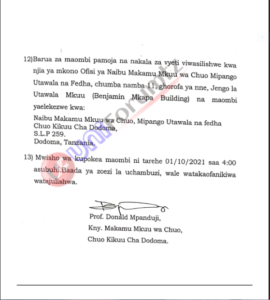 For more information Do not hesitate to Visit https://www.udom.ac.tz/