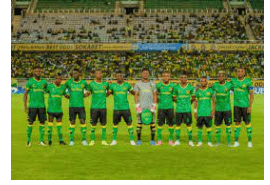 Yanga Afrcans Fc welcomes Geita Gold mine fc from Geita in the quarter-finals of the Azam Confederation Cup 2022. This match will be played at Benjamin Mkapa Stadium where Yanga Fc will host the team.

This match is important for both teams as this round is a knock-out where any winning team will qualify for the next stage (Semi-final).
Yanga sc is the only team that has not lost a single game in the NBC Premier League. Yanga Sc are looking to have a good squad as their team is getting good results this season.

The Azam Federation Cup is the premiere knockout tournament in Tanzanian football. Previously, the Nyerere Cup was the first tournament by knockout. It was created in 1974 and fought by teams from both mainland Tanzania and Zanzibar Islands.

That was after beating Mbao 2-1 in the final in Dodoma. Of course for those who came to watch the match, they won’t forget how hard it was to shut down the teams because they were all in such a tough fight.